“[Zero carbon buildings are] not something only for the largest wealthiest cities, but something we hope to make accessible to all.” –Nicolas Galarza, Vice Minister of Environment and Sustainable Development

In Colombia, with local leadership from the Colombia Green Building Council (Consejo Colombiano de Construcción Sostenible, CCCS), dialogue on national-subnational alignment on buildings began following the progress four cities made with the BEA. In Phases I and II of the BEA, Bogotá, Cali, Montería and Medellín all identified pilot projects and policy changes towards building energy efficiency. , which benefited from “deep engagement” with the BEA since 2016 reached the Implementation and Improvement stages for their project and policy, respectively. In Phase I (2016-2017), Bogotá and the CCCS team developed an implementation protocol of the national building code, Resolution 549 of the Ministry of Housing. Despite being issued in 2015, the resolution was not being implemented by cities due to lack of procedures. In Phase II (2018-2020), the work on implementation protocol continued, setting a step-by-step procedure for water and energy efficiency compliance for all new construction projects. The BEA conducted trainings for the public and private sectors, launching a national dialogue on implementation. 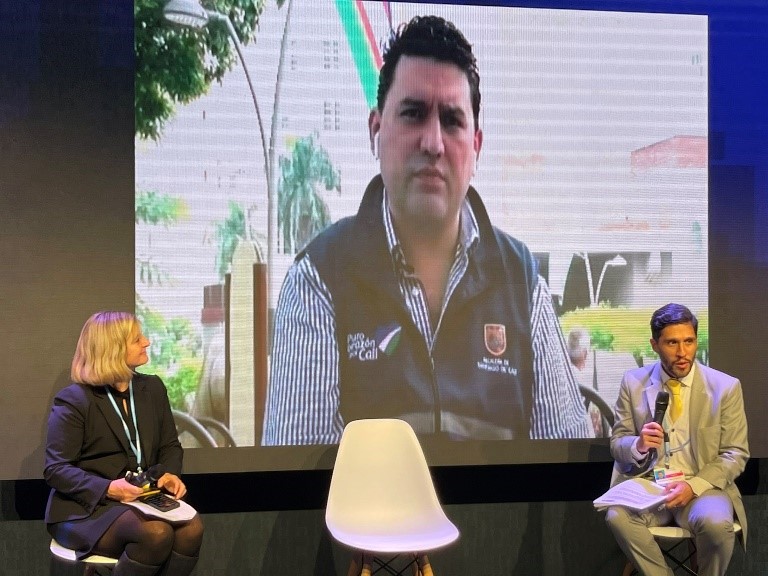 The BEA team in Bogotá created a Monitoring Reporting and Verification system that uses data from energy and water usage from utilities databases, the land registry database, and the construction permit database to calculate an energy and water consumption baseline to assess the impact of Bogotá’s Resolution 1874 and other public policy instruments. Without this work, Bogotá would not have a real baseline of energy and water consumption as all former baselines calculated for Bogotá (and for other cities) were based on simulations and aggregated data, not real database processing. This sets a precedent for replication across other cities in Colombia.

Elsewhere in Colombia, the partnership supported local dialogues in Cali and Montería and supervised technical studies for the development of implementation protocols for Resolution 549. In Montería and Cali, pilot projects were carried out in auditing public buildings for energy and water retrofits, preparing them to adopt and implement new building efficiency programs and policies. The BEA work brought stakeholders together to discuss and analyze the best energy efficiency measures for different building typologies for each of the three cities.

The BEA work in Colombia has seen substantial outcomes upon which the Zero Carbon Building Accelerator project has been built. The combined activity has fostered local dialogues and consensus between city stakeholders on actions to increase energy efficiency and begin to implement Colombia’s NDCs and National Decarbonization Plan. The BEA work has created public-private relationships and technical credibility that will enable the pursuit of increasingly ambitious projects.

Led by CCCS, local implementation has already included outreach to national and subnational governments, private sector coalitions, and civil society and the development of robust stakeholder working groups. Working group findings and local consultant input are being compiled to build a national baseline assessment and gap analysis from all stages of the building lifecycle. Similar analysis will be performed at the city level to ensure the goals of the national roadmap are contextualized and achievable at the local level. The recommendation report and roadmap with transformative actions is expected to be released in 2022.